For the past year, I have been praying about ways to engage with you on a personal level.  While several options have shown potential, nothing has grabbed my attention enough to take the dive.  Last week I was introduced to a new free app that I think will provide us with the avenue I have prayed for.

Last week approximately 65 of you held my hand as I dove into the water with a new app called Periscope.  About the same number joined me two days later for the second broadcast and then yesterday for the third.

But if you are like me, Periscope is probably a word you haven’t heard. So, I am going take this blog post to explain what it is and how it works so that you can join us on the next live broadcast.

It is a live streaming, free mobile app owned by Twitter allowing you to interact during a live broadcast.  The videos are available to view on the app for 24 hours after the broadcast ends.  (You do not have to have a Twitter account to use this app.)

How do I join these broadcasts?

1st – On your iOS or Android device, download the free Periscope app.  Click
on the option on the bottom right.  (It looks like three people.) Then
click the mag glass in the top left. Type “ABCJLM” or “Heidi Franz.”  Choose my account and then click the “+ Follow” button.  By following me, you will receive notifications when I begin a live broadcast.  It will also tell you when I am live and have recently broadcasted.

2nd – When you open the Periscope app, if I am LIVE, you will see my name in the list.  Click and then you will be joined to the live broadcast.  At the bottom you will see a box that says “Say Something.”  This is where you can comment, ask questions, or simply say “Hi!” 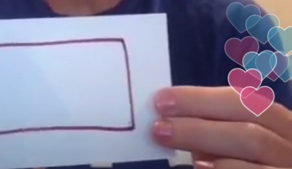 3rd – While watching a broadcast you can do two things:  Share and Show me some love.  First, to share a broadcast with your friends, swipe to the right on an iOS device and up on an Android.  Second, on Facebook you “Like” a post; on Periscope you “show love” by giving hearts (shown in the image above).  The more hearts you give, the higher ranking the video is.  To give hearts, click on the screen.  You will see them flutter up in the bottom right-hand corner.  You can give up to 500 hearts per session.

Why join a broadcast?

While you can view broadcasts for 24 hours, joining a live broadcast allows you to make instant comments and share questions with me.  This allows me to respond in the video to what you shared.  (In the above image you can see where someone joined and also a question was asked.) 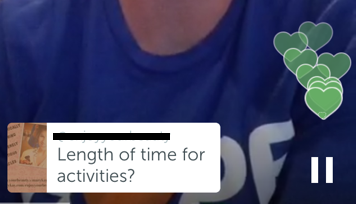 What will I see in a live broadcast?

Because Periscope is interactive, in the first broadcast I simply answered the viewers questions.  On the second broadcast I shared our favorite preschool Bibles, what I liked about each, and then ideas of how to make the Bible stories interactive with your child.  Viewers asked me about learning memory verses, translations of the Bible, and other related questions. I was able to answer each almost immediately with the live format. Yesterday’s broadcast explained how to teach children a new objective (rectangles).   (You can see the question posted in the image above.)

What topics will be covered on future broadcasts?

The sky is the limit.  Here are some topics that I want to cover soon…singing various songs used in the ABCJLM Lesson Plans, how to put together various craft projects, how to put together a prayer journal.  But, I want to hear the topics you want covered, so be sure to let me know.  Once I get comfortable using Periscope, I will save the videos on YouTube for you to reference as needed.

How will I know when you will be doing a live broadcast?

Several hours in advance I will announce on Facebook the next broadcast.  But if you are following me on Twitter or Periscope you will receive an immediate notification when a broadcast goes live.

No fears.  A link is always provided on Twitter so be sure to follow me on Twitter.  I may also provide a link to the most recent broadcast on the ABCJLM Facebook page or Group page as well.  Be sure to follow and join as the links will only be good for 24 hours.  After that time period the video is retired and no longer available on Periscope or through the link.

What if I have questions or have a topic idea?

I want to hear both!  The best place to share with me is on the ABCJLM Facebook Group page.

This video thing isn’t for me but I like the concept.

Understand.  Maybe you would be interested in me speaking at your conference, retreat, or meeting.  I would love to talk further with you.

Periscope contains a learning curve.  So if you don’t mind a few technical issues (i.e. user errors) and you would like to hear ideas on teaching your child a new academic concept, I invite you to view yesterday’s broadcast in two parts – Part 1,  Part 2
Each link will only be available until 1:50 pm Central Time

Previous Post: « Five Winners – One Sentence Storybook
Next Post: Do You Have a Talking Stick: A Visual Cue to Teach Respect and Listening Skills »