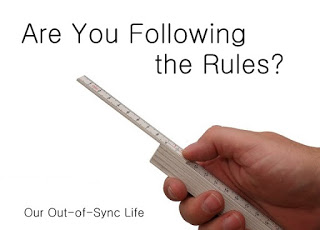 Ever feel like every thing you do is measured by a ruler?  Did I do enough?  Did I measure up to the expectations?  Then just when you feel you have a handle on the “laws” boxed around you, another fold of the ruler (as pictured above) is brought out and you have to begin again with more stringent rules.  After a while, you wonder, “Is it worth it?“.

A few years ago, I posted a review on Lisa Whelchel’s book Friendship for Grown-Ups: What I Missed and Learned Along the Way

.  While I can’t highly suggest the book, there is one point that I can’t get out of my mind.  If you’re curious, read my review.

Lisa
talks about Law vs. Grace. Those in the Old Testament (Abraham, David, Daniel, Esther) were under the
Law or a set of specific rules.    These Laws were given to show them how far they
fall from the perfection line.

Once Jesus died on the cross in the New Testament, we were no
longer bound by the Law and instead were covered by grace – which
is love from God that we don’t deserve.

In her book, Lisa further explains that she lived life as though she was still under the Law until she realized:

Being a Christian isn’t about following a bunch of rules.
It is about spending more time with God so that we learn His ways. As
we learn more about Him, we will become more like Him and desire His ways and we will have less
desire to sin or choose our way of living!

Christianity isn’t about following a bunch of rules.  Being a Christian means that you realize you can’t do it on your own and desperately need a Savior.  It’s time to put the ruler away and open our Bibles to learn about a God who deeply loves us.

Read more about Law vs Grace as it applies to mommies.

Previous Post: « What To Do When You Can’t Do Anything But Wait
Next Post: Review & Giveaway: Big Thoughts for Little People Book & App »