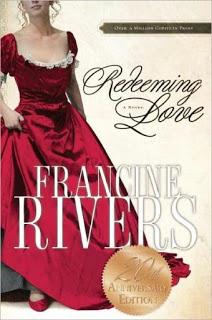 Have you read it?

It is by far the most influential fiction book that I have ever read.  And I would guess many of you would agree with me.  Just say the title Redeeming Love

and it will bring immediate reactions.

Based on the story of Gomer and Hosea, author Francine Rivers transports the reader back to the California Gold Rush in 1850.  We meet a man named Michael Hosea who deeply desires to seek God’s heart.  In contrast, we meet a woman named Angel who is anything but a godly woman…in the world’s eyes.  In a crazy twist of events, Michael obeys God and marries Angel. And in this marriage you read about the greatest love story every told.  An amazing story of “God’s unconditional, redemptive, and all-consuming love.”

This is one of the handful of books that I have read more than once in my life.  Actually, I don’t believe there is any book that I have read as many times as I have read this one (probably four or five times).  It is that powerful.  I even did this book as a Book Study with a group of women.  And the newest edition contains a six-part reading group discussion guide.

In all reality, it is an easy read and you won’t want to put it down.  But the storyline is so personal that you will not be the same after it.  While my circumstances are not anywhere near Michael’s and Angel’s, I see myself fighting God’s unconditional love.  I see how ridiculous it truly is.

There is a reason why over one million copies have been sold.  Why this is the 20th Anniversary of edition of this book.  I feel everyone woman needs to read.  It will change your life.

How has Redeeming Love changed your life?