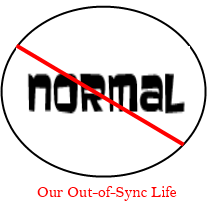 This is one of the very first posts that I made to this blog, over four years ago.  Bubs was just 4 1/2 years old at the time (January 2009).  So much has occurred since this post but the reality is that Sensory Processing Disorder still affects us.  I pray that our story will lead you to answers and encourage you on your journey.

We thought we had a very strong-willed child. Even at the young age of 18 months, Bubs would throw tantrums that lasted over an hour. The “books” said that I needed to be consistent and ignore the tantrums. The problem is that the tantrums never got better.

The simplest things could set him off.  Bubs could scream for 1 1/2 hours because I failed to pour the syrup in the exact (undefined) place on his pancake. Loud noises put Bubs into a panic and fear. The simple ticking of a kitchen egg timer moved him into a screaming fit.  Bubs struggled to stay in control when unusual situations presented themselves. While other kids could be calmed down during a meltdown, Bubs had trouble coming off the tantrum “high.” Night terrors plagued his sleep and broke our hearts. I tracked the good and bad days on the calendar and could predict two rough weeks followed by two calmer weeks. A cycle that followed the moon.

In talked to other moms I realized that they didn’t get it. Doing the typical “discipline” techniques didn’t work. Finally, I realized that what we were dealing with was not normal. It wasn’t just a strong-willed child. Bubs truly did not have the ability inside himself to stay in control in certain circumstances.

In the past, I had talked to our pediatrician but she really didn’t give me any suggestions. But at his 4-year well-baby check, the ped noticed some fine motor delays. At this time I re-visited the behavior issues. The ped explained that Bubs may be struggling with sensory issues as well.

We were sent to an occupational therapist who focuses on sensory integration.  Bubs was tested in fine and gross motor skills and sensory input. I explained to the OT Bubs’ medical history and how he spent the first month of his life at a Children’s Hospital following a heart birth defect.

With tears in my eyes I said, “I will do absolutely anything you tell me to do, if I can just have my Bubs back.” And I meant it.

After being evaluated, we learned Bubs was in the 1st percentile on fine motor skills for his age. Also confirmed were sensory issues, enough to fall under the category of Sensory Processing Disorder. After 1 ½ years of therapy, Bubs is a different child. He still cringes over the timer and struggles to stay in control. But, he is learning ways to handle the sensory overload in ways that are socially acceptable.

When we were first introduced to Sensory Processing Disorder, I did a lot of research and came up pretty empty handed. I felt lead to add this blog to my current preschool curriculum website – ABC Jesus Loves Me – focusing on encouraging families, especially those whose children struggle with SPD, Autism, and learning disabilities.

Now, I hear from moms on a weekly basis pleading for help. As I email them back, my heart goes out to them because I remember the emotional roller coaster and the unknown. Sensory Processing Disorder is real. But help is available.

It is interesting to read this post four years later.  If you follow this blog, you know that Bubs still struggles with control over his emotions, social skills, and language processing.  Our journey is not over.  But I can praise God for the improvements.  Bubs hasn’t been plagued by a night terror in a couple of years.  A ticking timer is no longer a fear.  Loud noises my still place fear on his face but no longer bring about screams.  Again, I praise God.